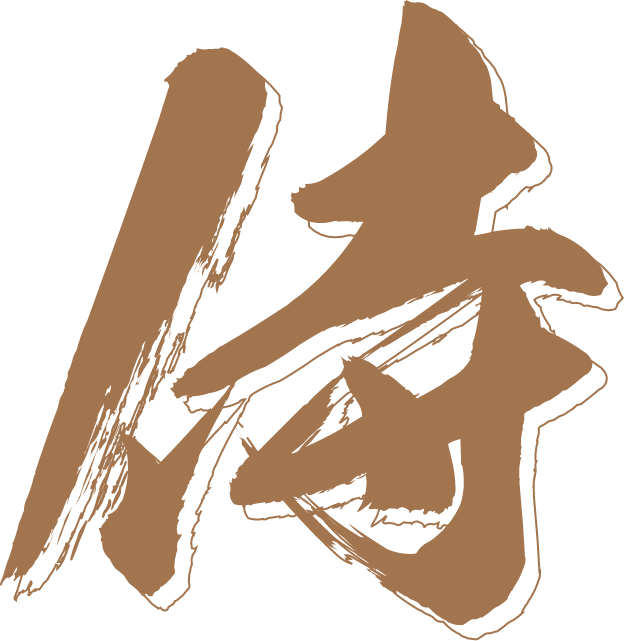 Walk in the Footsteps of the Samurai

Samurai is a general term for warriors — mainly military soldiers — who existed from the 10th century through until the 19th century. These warriors served under commanders known as busho, and the Central Japan region is famous for having produced many notable military commanders. 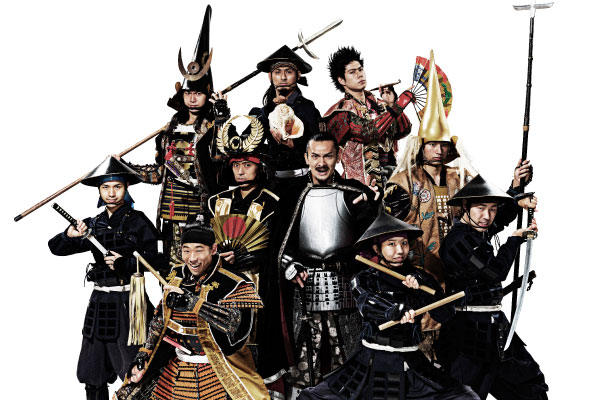 The Central Japan region gave birth to many military commanders who can be seen once again in modern times! Their masterful combat displays using swords and spears are a must-see. These warriors have the mission of omotenashi (hospitality). Every day, they welcome visitors to Nagoya Castle.

Oda Nobunaga was a military commander of the Warring States Period (1467–1567) who was feared for his innovative ideas and mighty military strength. Just as he was in reach of unifying Japan, he was betrayed by his own retainers and committed seppuku (ritual suicide).

He was a genius who reached the top of the known world despite his status as a commoner. He was an expert at capturing the hearts of people and a meticulous strategist with a firm grasp of any situation.

Tokugawa Ieyasu led the victorious Eastern army in the Battle of Sekigahara (October 21, 1600), which divided Japan in two, and established the Tokugawa Shogunate. His descendants continued to rule Japan for some 260 years thereafter. 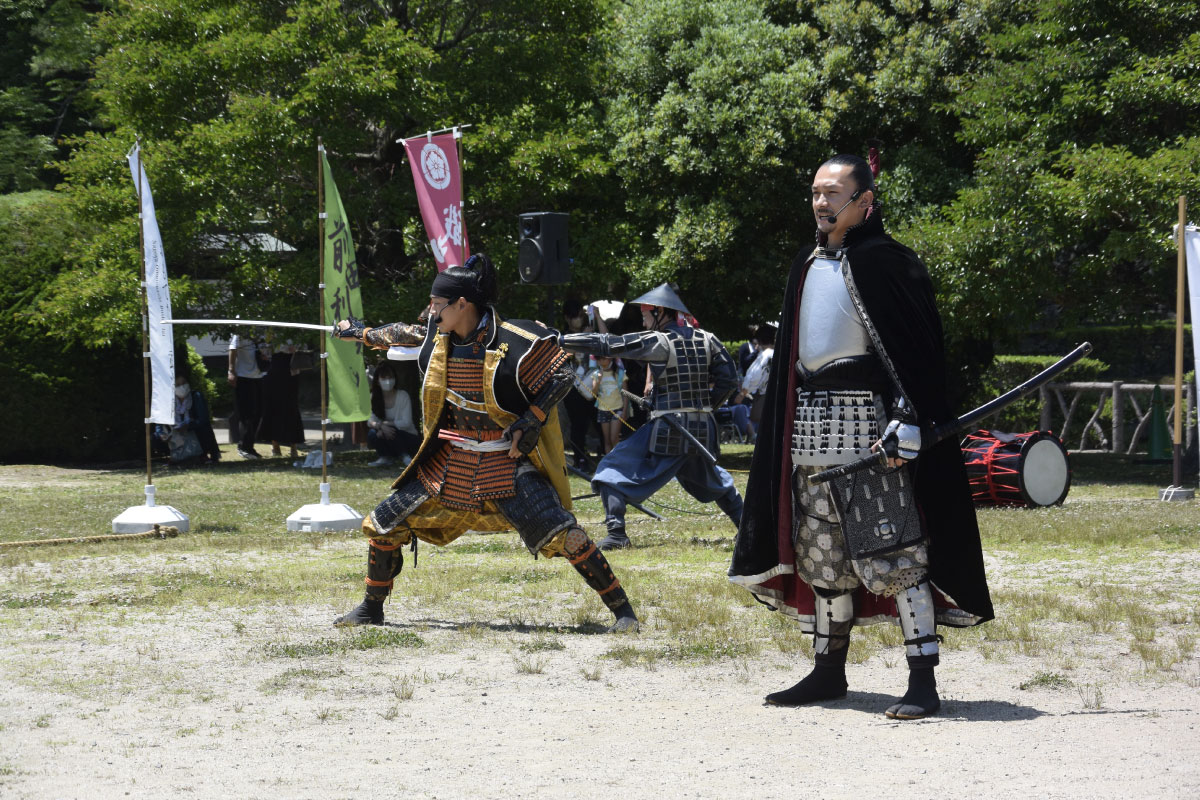 Near the Main Gate of Nagoya Castle is an array of renowned traditional Nagoya Meshi (Nagoya cuisine) restaurants, as well as souvenir shops offering samurai goods and various other souvenirs. 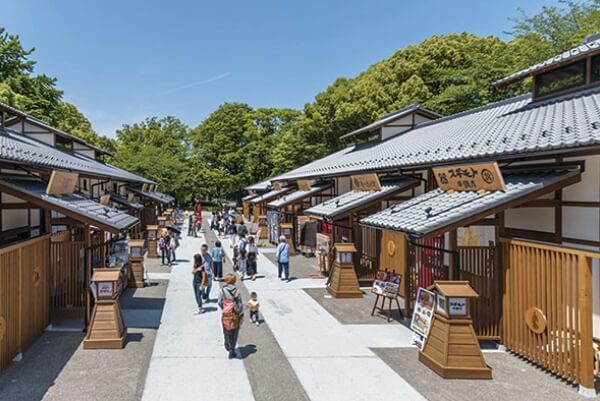 The streets near the castle’s East Gate are lined with exciting restaurants presenting new food culture. Here you can enjoy Western cuisine and sweets.

Located in the Muneharu Zone of the Kinshachi Yokocho shopping street, “Saien” is a café that is very particular about serving fresh seafood bought from the market each morning and organic vegetables. Available for either eat-in or take-out, the café’s amazing original Swimming Crab Hamburger contains one whole crab! 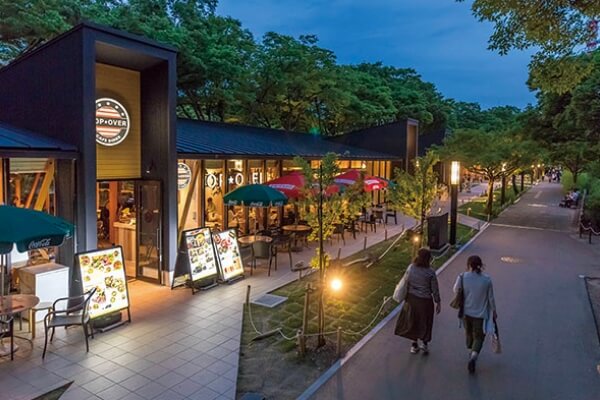 Lords of the Owari Domain, Tokugawa Yoshinao and Tokugawa Muneharu, have come to visit, accompanied by their Ninja retainers. Talk shows, dance performances, and omotenashi parades are held (irregular schedule). 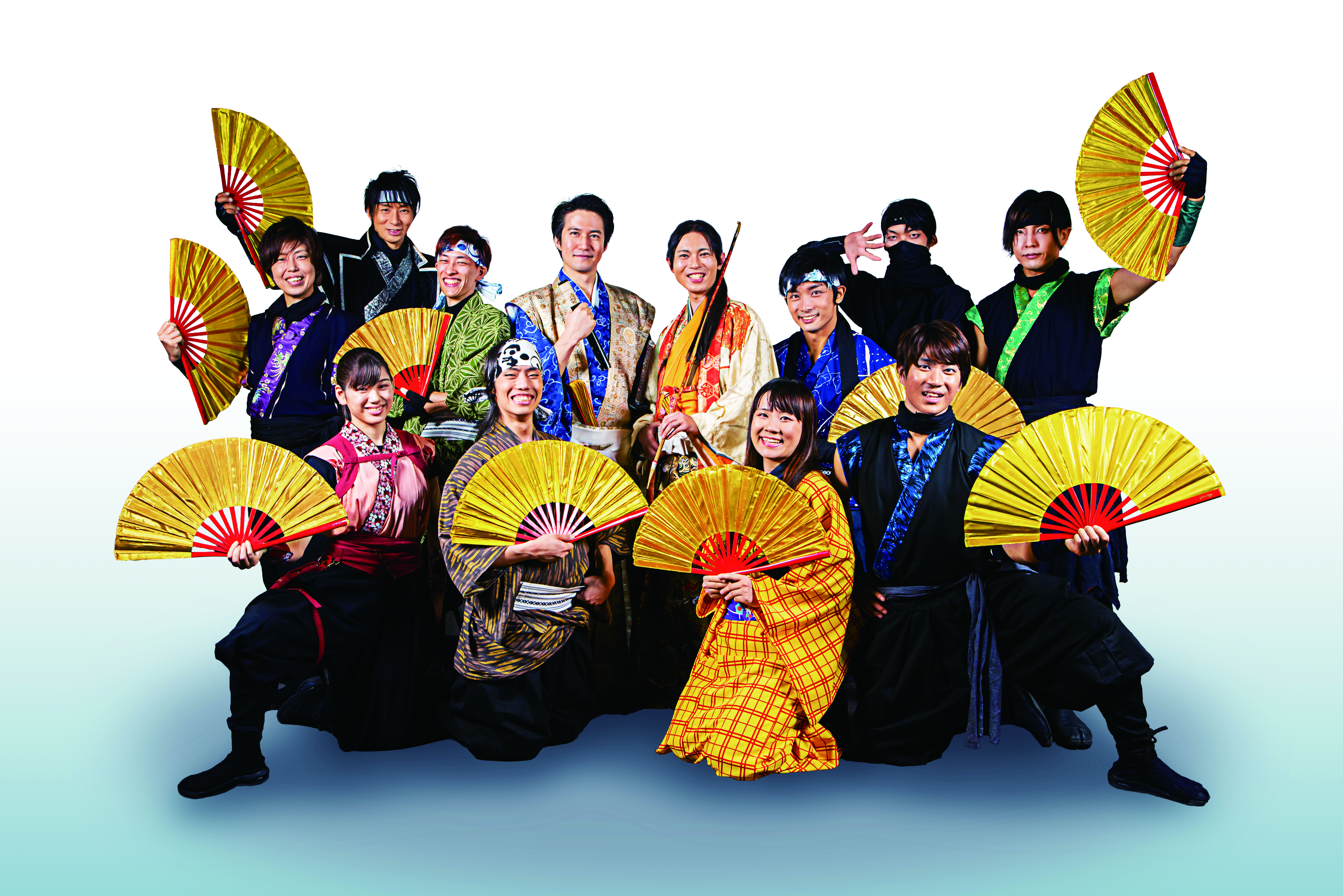 This art museum stores and displays numerous treasures passed down from the Owari-Tokugawa family. We also recommend taking a stroll in the adjacent feudal lord’s garden, the Tokugawa Garden. 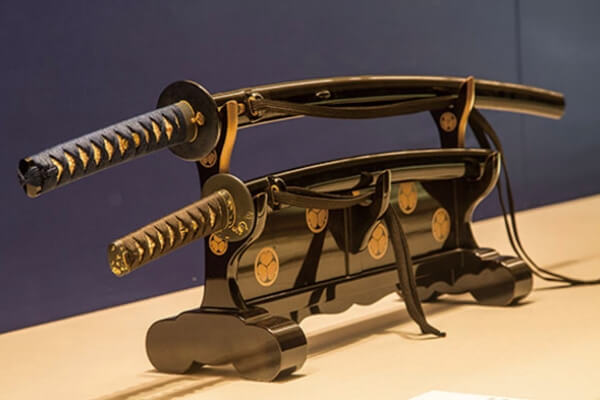 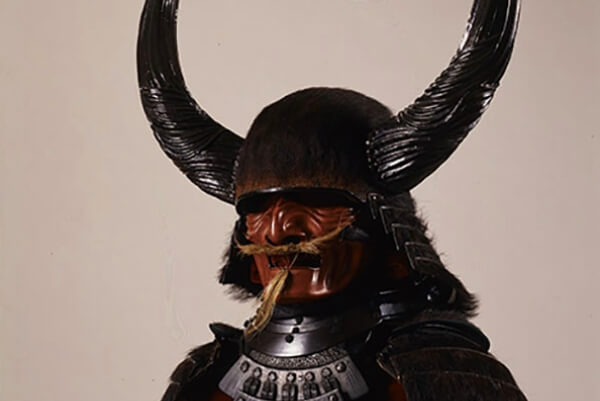 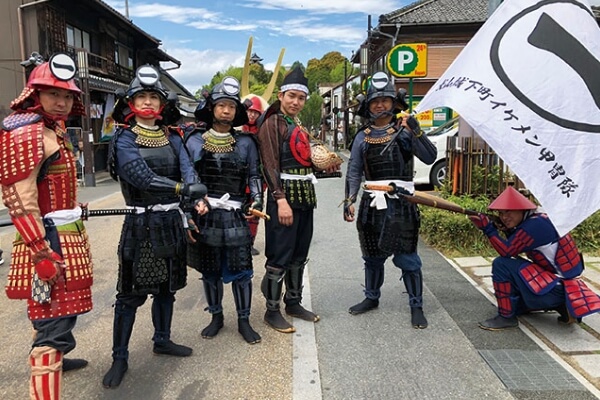 See young warriors dressed in magnificent helmets and armor strutting around Inuyama Castle Town! In addition to presenting combat displays and other performances, they are also happy to pose for commemorative photographs. (*)

Here at this museum you can see an enormous, elaborate diorama recreating the area around Inuyama Castle during the Edo Period as well as precious artwork and handicrafts. 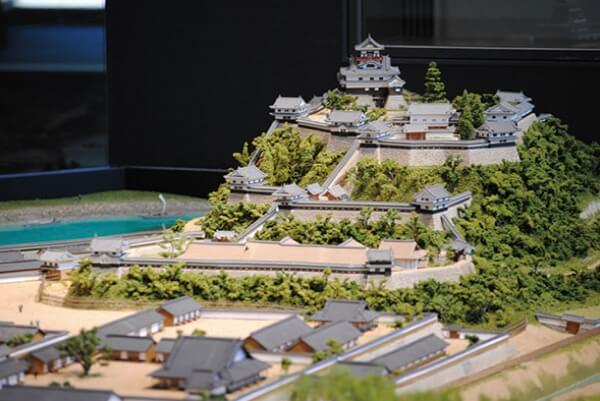 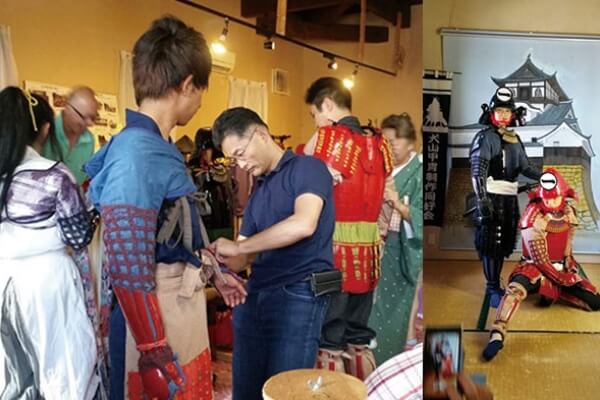 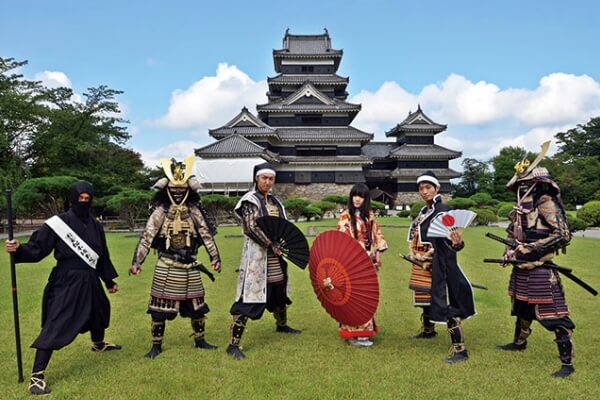 Dressed in gorgeous period clothing, the Matsumoto Castle Omotenashitai welcomes visitors to Matsumoto Castle, which is designated as a National Treasure of Japan. This unique omotenashitai comprises military commanders, ninja, and princesses. Take photographs with the team!

Here at this studio you can dress-up as a Samurai and experience sword-fighting. You can also dress up in a helmet and armor or period clothing and take a stroll around town. 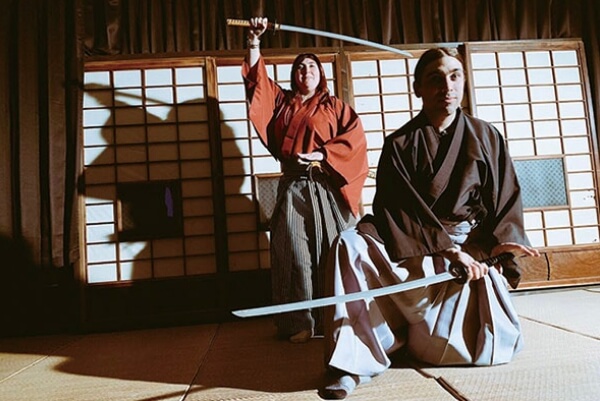 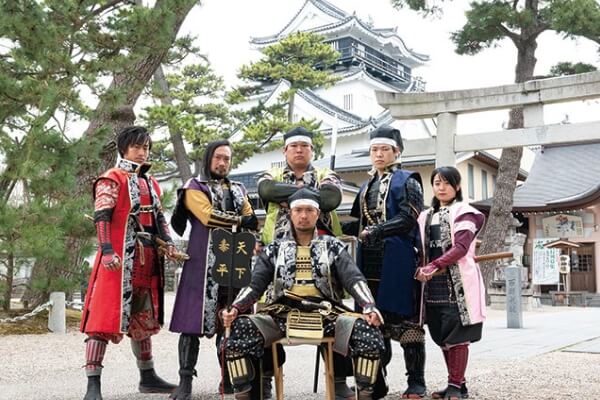 Operating at Okazaki Castle, the place where Tokugawa Ieyasu was born, the Aoi Bushotai comprises the “Four Guardians of the Tokugawa” (Ii Naomasa, Honda Tadakatsu, Sakakibara Yasumasa, and Sakai Tadatsugu) who fought on behalf of Tokugawa Ieyasu and their retainers. Their “Great Combat Show”, in which members wave enormous flags and dance, is very popular. 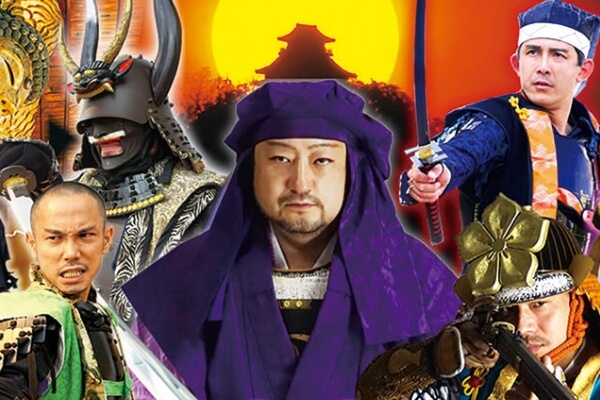 This band of samurai warriors is led by military commander Saito Dosan, whose base was Gifu Castle. Members are glad to provide visitors with explanations of Gifu Castle or give directions for getting around Mt. Kinka.

Swords are referred to as the soul of the Samurai. This museum displays various materials related to the sword production process and history. 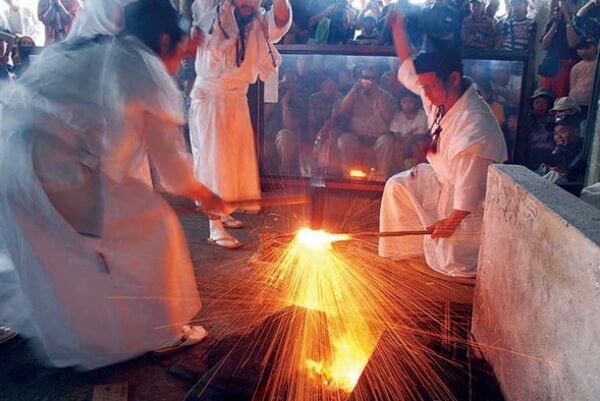 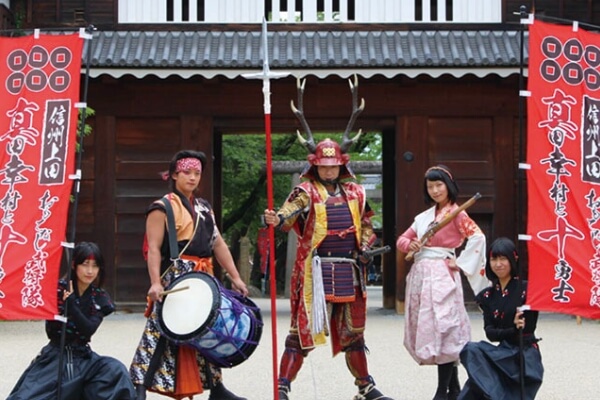 Known as the most skillful military leader of the Warring States Period, Sanada Yukimura was feared even by Tokugawa Ieyasu. Together with his faithful retainers known as the “Sanada Ten Braves”, he has been resurrected in the present day in the Shinshu Ueda Omotenashi Bushotai. Performed once a month, the full-cast show “Shinshu-Ueda Castle Impassioned Performance Chapter II: Friends Boldly Pushing Forward” is a true masterpiece!

Approx. 8 minutes’ walk from Ueda Castle, this street is lined with houses dating from the days when it was part of the Old Hokkoku Kaido Highway. Today, the street is an Ueda Castle Town shopping district preserving the streetscape of the Edo Period, with the shops selling appealing Shinshu-Ueda specialty goods and brand products. 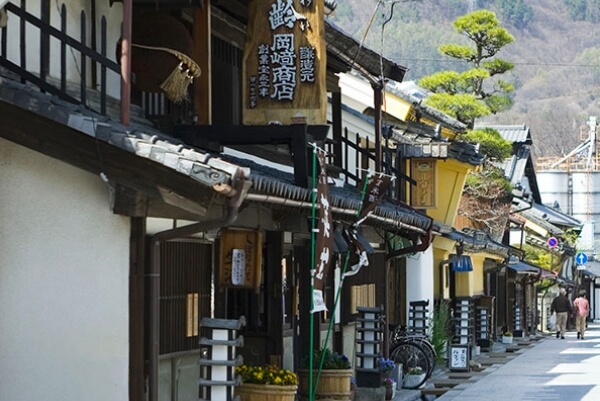